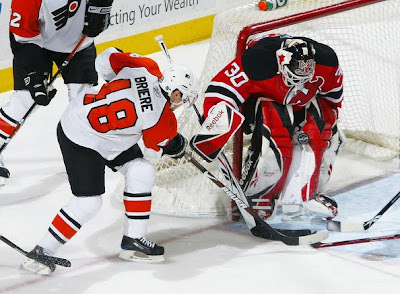 In honor of our esteemed comrades at Frozen War Room, Hockey Plumber is proud to present the first in a new weekly feature: The Friday NHL Power Rankings. Parenthesis indicate last weeks ranking courtesy of the War Room.

The Devils, Sharks, Flyers and Wings make moves to the top, while the Penguins, Canadiens and Canes go South.

The Devils cannot be beaten on the road. Their 9-0-0 away mark closes in on a NHL record. They are also performing well at home and move to the top spot.

Heatley and the Sharks are on a tear. They have more points than New Jersey, but have played three more games.

The Avs keep on winning. 6-3-1 in their last ten. Everyone outside of Denver is just waiting for the bubble to burst… doesn’t look like that is going to happen any time soon!

Ovechkin is out. Washington can’t keep it up, right? Wrong. The undeterred Caps have won 3 straight.

The defending Champs have everyone injured. They have lost 4 in a row, but get Malkin back on Saturday.

Ryan Miller continues his outstanding play. His 1.82 GAA through 13 games is all you need to know to understand why the Sabres stay high on the list. Too bad he can’t start every night as Lalime has been shaky to say the least.

Anze Kopitar stays tied with Ovechkin for the league lead in goals. The Kings are getting goals from all their forwards and solid play from the blueline and goaltender Jonathan Quick.

The Flames stay with the Kings and Avs by winning their last four games. Jarome Iginla is starting to look like his old self again. Calgary fans have to be optimistic now that Rene Bourque is getting some help.

The Hawks have suffered through some injury issues. That Marian Hossa guy has yet to play for them… We’ve heard he’s pretty good! Watch out for Chicago when they finally get healthy.

Philly has ripped off 5 straight and is starting to look like the team all the experts predicted they would be. Simon Gagne’s annual injury has materialized. Scott Hartnell has decided to stop chewing on opponents and start scoring goals instead.

After a dismal start, the Wings start to get it together. They are 6-2-2 in their last ten thanks to Tomas Holmstrom and Niklas Kronwall. Do they continue to climb? Ask the goaltenders.

The Stars would be higher on this list if they were better after the third period. Six OT losses means they keep it close but don’t finish teams.

The Rangers rollercoaster continues. Gaborik and crew have filled the net, but they also have given up too many. 3-6-1 in their last ten.

The 9-1 drubbing by Detroit had to hurt. Mason is sophomore slumping? No matter, Rick Nash can handle things all on his own most nights… or he will need to with injuries to Huselius and the surprising Raffi Torres.

Stamkos and Malone keep the goals coming. If they could get goals from ANYONE else, their 5 OT losses would not be there and Tampa would actually be scary. “Backup” netminder Antero Niittymaki has been terrific.

Phoenix continues their stellar defensive play, but they can’t seem to score enough. They are 4-6-0 in their last ten moving them down the list a bit.

No Ilya Kovalchuk. No Problem. The Thrashers didn’t panic when their superstar captain went down. Rich Peverley and Zach Bogosian have made sure there is just enough to get by without #17. If they can start winning at home, Atlanta keeps climbing the list.

The Bruins continue to flirt with mediocrity. Without Marc Savard and Milan Lucic out, Boston stays near .500. Tim Thomas has continued his stingy ways in the net, but can’t seem to find the wins.

Vancouver’s 10-10-0 record illustrates that it is difficult to be consistent when injuries strike key players. Daniel Sedin, Luongo and Demitra’s time out of the lineup makes it difficult on the Canucks to stay on top of things.

Jason Spezza has 1 goal through 14 games. Do you think he misses Dany Heatley? Sens have been erratic thus far. Make a comeback one night, blow a two goal lead in the next. Leclaire and Elliott need to be better.

The Isles have competed every night. Like Dallas and Tampa, their 6 OT losses keep them from being higher in the standings. However, the Islanders were not expected to play as well as they have to date. Is their 6-6-6 overall record a bad omen? Are the Devils happy about it?


22. (24) Nashville Predators
The Predators continue to be the Predators. Better than everyone else expects. Not as good as their fans hope them to be. The team’s best goal scorer is a defenseman. Need we say more?

St. Louis is getting the goaltending. Just not the goals.

The Oilers are 2-7-1 in their last ten. Dustin Penner is now the guy GM Kevin Lowe paid for, but this one man show can’t play on the road.

Carey Price is great in shootouts… but sub-par in regulation. The Canadiens cannot be counted out…nor in.

Martin Havlat has two goals. Let that sink in… they were scored 11 games apart. Not good.

Corey Perry cannot be stopped. Ryan Getzlaf cannot score. J-S. Giguere says he’d rather retire than be a backup. His .895 save percentage and 3.64 GAA say he should retire!

David Booth survived an attempted decapitation by Mike Richards. The Panthers just try to survive. Tomas Vokoun has faced 459 in 13 games. That is more than 35 shots per night! He’s nearly impregnable most nights. Nearly.

The Canes are abysmal. 0-8-2 in their last ten, winless in 13 straight. Eric Staal is suffering his brother’s Stanley Cup hangover and Cam Ward is gone after a fluke leg laceration.
Posted by The Plumber at 4:30 PM