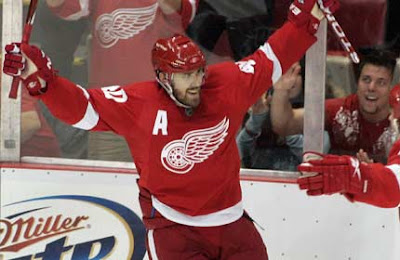 The Red Wings started the season by dropping their first two games to St. Louis in Sweden.  They finished October having lost seven games.  Although a slight exaggeration, this is a team that doesn't normally lose it's seventh game until December!

Maybe their slow start was a result of this veteran squad not getting much time off after two straight runs to the finals.  Maybe this missed Marian Hossa, Mikael Samuelsson, Jiri Hudler and Tomas Kopecky more than anyone expected.

Whatever the reason, happy days are here again for Detroit.
Tonight, Henrik Zetterberg put on a show. Hank had three goals and two assists in the Red Wings' 7-4 victory over the Anaheim Ducks.

November has been kind to the Wings. Former captain SteveYzerman was inducted into the Hall of Fame.  Future Hall of Famer, and current captain, Nicklas Lidstrom was honored by the NHL in a pre-game ceremony for reaching 1,000 points... and The team has now won three straight and five of their six games this month.

Cinderella's coach turned back into a pumpkin. She was not pleased. Yet the Wings could not have had a better time since pumpkins started to appear on neighborhood porches.  Detroit is back in a big way and has no wicked step mother to fear!