Ovechkin: Can Alexander the Gr8 surpass The Great One? 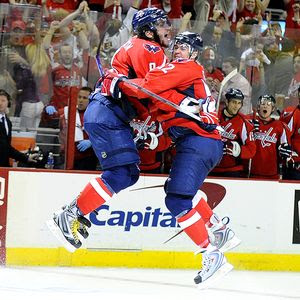 It's early in the 2009-10 season but two headlines seem to keep repeating: "(Insert star player name here) Out for x to x weeks." and "Ovechkin scores 2 in Caps Victory."

Malkin, Gonchar, Kovalchuk, Booth, Franzen, etc... missing time with various ailments, we have seen an alarming amount of big names go down. Meanwhile Alex Ovechkin has scored 13 goals in the first 12 games... which has inspired more than a few writers talking about Ovechkin breaking Gretzky's all-time goal mark. The pile of injuries and goals by the Great 8 made us ponder...

However, what does stand in the, is the way he plays the game. Gretzky was Baryshnikov on ice. At 5'10" and 180 lbs., he danced and weaved through traffic and slipped by heavy contact.  When did we ever see Gretzky take a crushing body check? By stark contrast, Ovechkin, 6'2" and 232 lbs plays like a NFL special teams wedge buster. He consistently seeks out contact and will even put a big hit on himself. Ask Evgeni Malkin, he's seen it.

When you compare some modern day power forwards that are roughly his size, a disturbing trend stands out: (Cam Neely, 6'1", 218 lbs; Kevin Stevens, 6'3" 230 lbs; Keith Tkachuk, 6'2", 232 lbs) after 5-7 seasons these raging bulls started to wear out.  Playing a physical game takes a toll. These players were still productive (in Tkuchuk's case he still is, and is nearing the 550 goal mark) later in their careers, but they were not the same after the injuries began to pile up.

Ovechkin is in his 5th season and has yet to suffer an injury that has kept him from playing. But is it only a matter of time?  Will he need to alter his approach in order to stay healthy enough to honor his near-lifetime contract with Washington?  Let's hope not. He is too fun to watch as is. Mario Lemieux is not going to have another unretirement, so someone needs to take a run at number 99's records.