If an Islander Falls in the Woods... 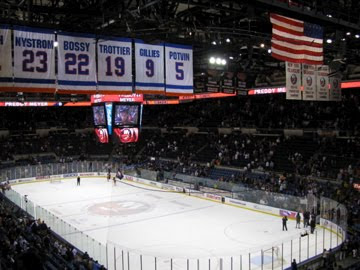 The Islanders finally notched their first win of the season last night.  Superstar in waiting, John Tavares, won the shootout with some nifty moves before whipping the puck past Carolina goaltender Cam Ward.

"Coach Scott Gordon chose John Tavares to go third in the shootout to see how the No. 1 pick approached the pressure situation.


Tavares helped the Islanders avoid the worst start in franchise history, scoring the clinching shootout goal in the Islanders' 4-3 win over the Carolina Hurricanes on Wednesday night.

'I think he's had an opportunity to watch and see some of the things that go in front of him,' Gordon said. 'That was one of the reasons why I put him third; to see his approach in the net.' " [CP]

The coach wanted to see but the Islanders' fans... did they? An announced attendance of 9,122 was on hand to "witness" the victory. 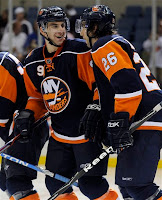 Sure it has been a rough start, but the top pick of the 2009 Draft is on the ice every night.  Yes, it took a while to get a win, but the Isles have been competitive nearly every game, as witnessed by the 3 overtime/shootout losses.

Additionally, the Isles have other young talent worth watching. The very likable Matt Moulson comes to play and continues to produce. Kyle Okposo is creative and exciting to watch. Josh Bailey, Mark Streit, etc...

The Isles are improving and are worth watching.  There were plenty of you at the Draft Day Party.  Where are you Islanders fan?
Posted by The Plumber at 10:44 AM