Coyotes To Be Sold To the NHL? 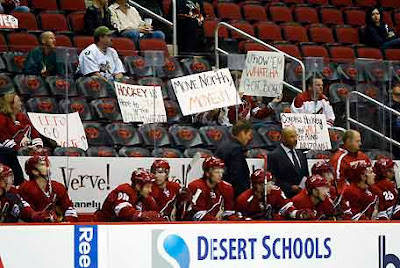 The Canadian Press reports that Phoenix Coyotes owner Jerry Moyes has agreed to sell the franchise to the NHL.


The deal still must be approved by U.S. Bankruptcy Court Judge Redfield T. Baum. It is also reported that Wayne Gretzky, who has a US$22.5 million claim in the case, has not agreed to the deal.

"NHL deputy commissioner Bill Daly says that once the deal closes, the league will immediately look to sell the team, preferably to an owner who will keep the club in Arizona.

The agreement would provide the nearly $80 million that is owed SOF Investment, the largest secured creditor, and the NHL would get the $37 million it is owed for funding the team since last fall.

Between $9 million and $11 million would be available to be divided between Moyes and Gretzky." [CP]

Honestly, who knows what will happen.  This case has been anything but predictable.  What seems like merely formality now may prove to be only step one in a new battle.

"...the league will immediately look to sell the team, preferably to an owner who will keep the club in Arizona."  At this point, the question must be asked, is it even possible to make it work in there? 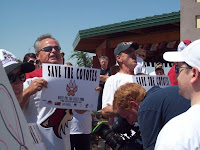 Between the arena lease, the massive concessions needed by the city of Glendale, the financial loss  set by Moyes' precedent and the abundant ill will that surrounds the franchise by jaded fans, the Arizona Cardinals ownership, etc... what investor wants that kind of challenge in this economy?

We hate to see all the people who did support this team through it all get the shaft... the good people of Winnipeg feel their pain, but how can the team stay long term?
Posted by The Plumber at 10:13 PM