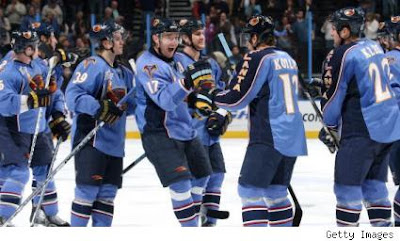 With so much hoopla surrounding ownership battles in Phoenix and Tampa Bay and the hype that accompanied the Dany Heatley and Phil Kessel deals, one story that has flown under the radar (no pun intended) has been the Atlanta Thrashers off-season.


Atlanta has been embroiled in a longstanding ownership squabble which includes not only the Thrashers, but the NBA’s Hawks and Phillips Arena. This August, a Maryland Court ruled a complicated buyout clause invalid, thus removing the ambiguity in decision making… for now.

Maybe it was the impending August ruling, or maybe it was the realization that the team’s superstar Ilya Kovalchuk could walk away after the next season, but the Thrashers, normally an afterthought for the Atlanta Spirit ownership group, received attention this off-season.

The Thrashers failed to qualify for the playoffs again last season, but did boast five players that scored at least 20 goals. Additionally, after a slow start that seemed to doom their season, the team seemed to embrace new coach, John Anderson’s system by February, finishing the last three months of the season with a very respectable 18-12-1 mark.

GM Don Waddell kept the team that finished on a strong note virtually intact by re-signing nearly all of the team’s free agents. Center Eric Perrin was the only player with significant ice team not to be retained.

Waddell also added several impact players to the team by signing monster-sized forward, Nik Antropov, acquiring veteran blueliner Pavel Kubina, and bringing in speed merchant Maxim Afinogenov on a no-risk tryout basis. It should not be overlooked that the Thrashers had a strong draft class this year. Although it probably remains unlikely that he plays in the NHL this season, first rounder Evander Kane bolsters the team’s very near future.

Antropov, who is listed at 6’6”, 240 lbs. certainly casts a shadow on the ice. Yet, he has been plagued by and often criticized for his inconsistent play. Keep in mind that he has never played with a player the caliber of Kovalchuk before, and that alone may be just what he has needed to fix what ails him.

Kubina brings another hulking presence to the team. At 6’4”, 250 lbs. he can clear a crease. He also is an offensive minded blueliner, scoring 14 times last season, that can log serious minutes and be a positive influence in the locker room. His game will allow star-in-waiting, Zach Bogosian, to develop even further in his second season.

Afinogenov represents another potential big bonus to the team. He possesses otherworldly speed and a fair share of offensive talent. However, he has oft been injured and inconsistent. This could be his last chance in the NHL to prove his detractors wrong, as no other team seemed to be interested in him this off-season. That motivation, coupled with the opportunity to play with some familiar faces may prove the magic formula for Maxim.

With a more complete understanding of Anderson’s scheme (which was massively successful in the AHL), the addition of new faces, which could give the team up to eight players capable of scoring at least 20 goals, increased production and play from the blueline, and therefore a little less pressure on goaltender Kari Lehtonen, the Thrashers have a lot of appeal.

Hockey Plumber believes that this team looks much more like that one that won the Southeast Division in ’06-’07 and much less like the other eight teams that did not make the playoffs. Look for the them to return to the post-season this year. They have the firepower and the cap room to make any necessary deadline deal. If the Thrashers succeed on the ice, they will likely retain Kovalchuk with a lengthy and lucrative deal. That will not fly under anyone’s radar.
Posted by The Plumber at 12:57 PM