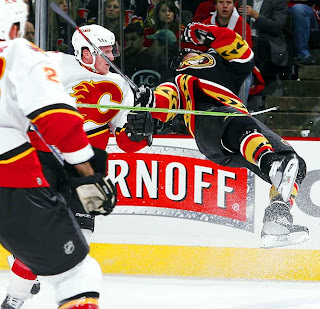 It's the water cooler discussion of the day: Dion Phaneuf's knock out blow on Kyle Okposo.

Don't get me wrong, I am a proponent of the rough stuff... when the games actually count!  There are Islanders fans who see evidence that Phaneuf left his feet, or led with his elbow, and Flames supporters that see a clean hit, but regardless of the details, it is obvious to every hockey enthusiast that it occurred during a pre-season contest.

There is just no excuse for this at this time of year.  In the regular season, you watch this and exclaim,"Wow!" During the playoffs you stand and cheer, and beg for more, but in September you wonder why.  Did the Sutter's insinuate to Phaneuf that his roster spot was not secure? Did he mistake Okposo, momentarily, for Sean Avery?

No matter what Phaneuf's motivation, you can bet that he will be receiving a phone call from a NHLPA representative reminding him of the brotherhood of NHL players and that he should be thankful that the Isles have to wait until March 25, 2010 for retribution.
Posted by The Plumber at 2:09 PM