Mats Sundin Calls It a Career 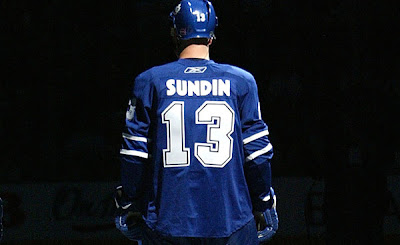 ''It was just time, I think. Obviously, it's not an easy decision but I feel with body and soul right now, it's time to quit my professional career as a hockey player,'' said Sundin. ''I'm very glad that I played last season with the Vancouver Canucks and I think I needed that. But now with the season getting started again, it actually feels nice not having to practice every day and play games every other day so I think this is the right time for me.''

"I'm obviously very grateful for having a chance to play in the National Hockey League and represent the Quebec Nordiques, Toronto Maple Leafs and Vancouver Canucks," said Sundin. "It has been a dream come true for me.''

Sundin was the first player selected in the 1989 NHL Entry Draft by the Quebec Nordiques, and played his first season on a line with Joe Sakic who also retired this off-season.

Sundin retires the highest scoring Swedish player in League history, with 564 goals, 785 assists and 1,349 points during a career that was played exclusively in Canada, first with the Quebec Nordiques, then the Leafs and last season with the Vancouver Canucks. He was an eight-time NHL All-Star.


Sundin is one of only five NHL players to have scored at least 500 goals and never played in a Stanley Cup Final.

"No, not really," chuckled Sundin when asked if he had regrets over not winning a Stanley Cup. "I don't feel bad. On the other hand, I had so much fun playing in the NHL and I experienced so much, I feel I got what I wanted from that league."

Swedish hockey fans will remember his exploits in International play winning World Championships in 1991, 1992 and 1998, and as captain of Sweden's gold medal winning Olympic team in 2006.

Sundin was a phenomenal all around player, as classy as he was clutch. He will be missed.
Posted by The Plumber at 11:23 PM