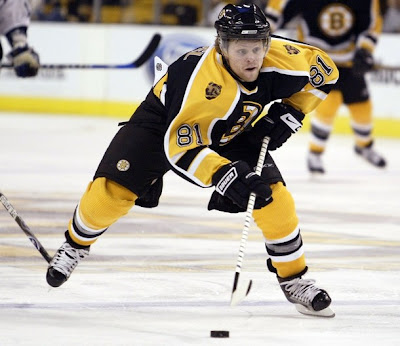 Multiple outlets have reported that the Boston Bruins have traded forward Phil Kessel to the Toronto Maple Leafs in exchange for a first and a second round pick in 2010, and a first round pick in 2011

Also reported was that the Leafs and Kessel have agreed to terms on a five-year, $27 million deal.

At 21 years old, and coming off a 36 goal, breakout season, Kessel clearly has great potential. He adds much needed scoring punch to the Maple Leafs lineup. However, Kessel is also listed as out indefinitely due to recent shoulder surgery.

He is a high risk/high reward player. At his worst, he is the guy who was benched at the start of the 2008 Playoffs for lackadaisical defensive play. At his best, he is a hard charging goal machine that elevates his play when it matters most as evidenced by his point-per-game scoring in his playoff career.

The question is: Did the Leafs just commit $5 million + per season to the next Doug Gilmour, or $27 million to a one year wonder that Bruins fans will poke fun at for the next decade?
Posted by The Plumber at 11:43 PM