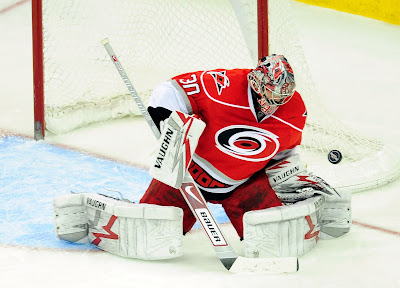 Carolina goaltender Cam Ward has agreed to a six-year, $37.8 million extension with the team. 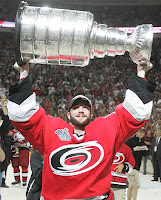 "The pressure's going to be there to play like an elite goaltender now that I'm being paid like one... That's not something that I've shied away (from) in the past, and that's why I ultimately chose to be a goaltender, to handle that pressure and play up to that."

Ward has played like an elite goaltender all along, winning the Conn Smythe Trophy in 2006 when he minded the net for Carolina's Stanley Cup Championship. Last season, Ward won 39 games in the regular season and led the Hurricanes to the Eastern Conference final before losing to the eventual Stanley Cup champion Penguins.


You have admire his attitude of still believing that he has something to prove. Carolina now has more than 6 million reasons to expect elite performances from Ward each year.
Posted by The Plumber at 7:28 PM