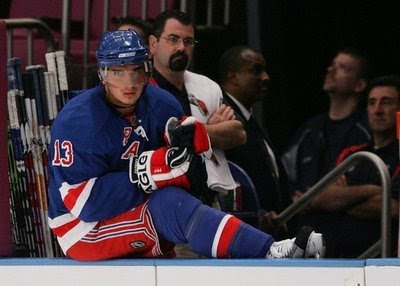 The KHL has found a new niche player.

Not that long ago, the KHL was a great option for those not yet ready or able to play in the NHL. The now deceased, New York Rangers draft pick Alexei Cherepanov was a prime example. It also has served as a nearer-to-home, big money, farewell tour for overage stars like Jaromir Jagr and more recently, Sergei Fedorov.

Yet the lure of tax free, high dollar, fringe benefit-laden contracts for Viktor Kozlov, Jiri Hudler and now Nikolai Zherdev has seen the KHL not only compete, but win battles for still emerging talent.
In the salary cap era NHL, 20-goal scorers are nice, but are not worth breaking the bank for... particularly if said players do not possess a complete game. The KHL will continue to win bids for the services of these players as long as they pay what amounts to Alex Ovechkin money, but in return receive the play of, well, Nik Zherdev.
Posted by The Plumber at 4:32 PM