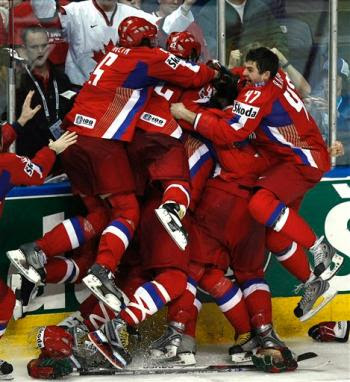 The pregame locker room pep talk goes something like this: "...ok boys, you better lace 'em up extra tight, because we are playin' Russia tonight.
Back in my day, when we played the USSR squads, these boys were a mystery. An enigma. Now you guys have played with or against most of 'em... and that, well, you know what a nightmare they are. They are gonna come at you hard, and fast. They zip around the rink like machines... cycling, spinning, passing the puck twice before you can even find it..."
Owen Wilson pops his head in the door, interjecting: "Okay, so the scariest environment imaginable. Thanks. That’s all you gotta say, scariest environment imaginable."
"Well... um... yeah, ok... keep yer head up and let's hope for the best!"
Seriously what could be more terrifying to a goaltender than watching a breakout by Evgeni Malkin, Alexander Ovechkin and Ilya Kovalchuk speed toward you? Pinching in behind them from the blueline are Sergei Gonchar and Andrei Markov for support!
Better yet, when the aforementioned line's shift is over, Pavel Datsyuk, Alexander Semin and Alexei Kovalev hop over the boards! Ouch!
The Russian Olympic hockey team should consider the opening ceremonies as a coronation. If Canada, the US, Sweeden or another team take gold from this squad, it will be Miracle on Ice II.
Canada and the US announced their camp invitees about a month ago. Although they will send out formidable teams, there just won't be a collection of names, from either squad, out on the ice, who will strike fear and trepidation into the hearts and minds of opponents that Russia certainly will. They won the last World tourney... this team will be even more talented.
It will be Armageddon out there, with Alexander the Gr8 riding the pale horse straight to the top of the medal stand.
Posted by The Plumber at 10:33 PM