"Jim Balsillie, I'd like to introduce you to Patience. Patience, this is Jim Balsillie"... 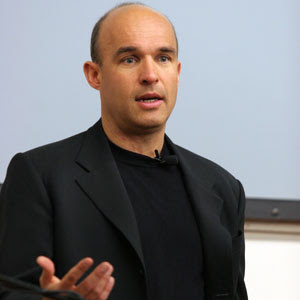 Had that introduction been made just a few years ago, Mr. James Laurence Balsillie just might be the owner of a NHL franchise. Let's rewind.
On October 5, 2006, Balsillie made a bid to purchase the Pittsburgh Penguins for $185 million from Mario Lemieux and his partners. On December 15, 2006, He withdrew his bid to buy the team after receiving notice from NHL commissioner Gary Bettman that the league would not approve the deal unless he agreed to keep the team in Pittsburgh. Although he did not divulge a plan to move the team, it was widely speculated that Balsillie planned to move the team to Canada. His sudden withdrawal left Lemieux angered and many of the other 29 owners suspicious.
Wasting no time... On May 23, 2007 it was announced that Balsillie had reached an agreement to buy the Nashville Predators from Craig Leipold. In a familiar sounding tone, Balsillie had stated that he would move the Predators to Hamilton, Ontario as soon as the 2007-08 season.
Balsillie questioned Nashville's viability as a hockey market and cited the team's relatively poor attendance record despite their on-ice success. Again acting swiftly, on June 14, 2007 Balsillie started to accept season ticket deposits for the Hamilton Predators through Ticketmaster. By June 19, he was believed to have 12,000 deposits for season tickets in Hamilton, far exceeding the Predators' current season ticket base. His intention was to show the NHL Board of Governors that Hamilton is a more viable NHL market. What Balsillie did show was that he had a lack of respect for the NHL property and trademark by selling tickets for a team he did not own, and in a city in which the franchise did not reside. Needless to say, neither the Commissioner nor the Board of Governors were impressed. Obviously, the attempt to purchase the Predators fell through.
On May 5, 2009, Balsillie made an offer of $212.5 million to purchase the Phoenix Coyotes, conditional on relocation to Hamilton as soon as the 2009-2010 season. Pending bankruptcy proceedings, the Board of Governors unanimously rejected his ownership application.
Since then, Balsillie has called for a probe of his rejection, and most recently, asked the bankruptcy court to to rule his bid valid, essentially requesting the court to overturn the NHL's rejection of his as an owner. He also has set a deadline for the expiration of his bid. Should he face any further delay after September 14, 2009 in his ownership attempt, he will again withdraw...blah, blah, blah...
As each entanglement and argument expands, Balsille further distances himself from the Jeremy Jacobs' and the Ed Snider's and increases his ever growing perception of being the NHL's own version of Al Davis.
In each of the aforementioned ownership bids, Balsillie could have won control of a NHL franchise if he would have applied just a smattering of commitment to "attempting" to make a go of things in their current market. Then, when proved over time, that his franchise could not survive without a change in market, he, in conjunction with the league, could find a suitable alternative... but, then again Jim Balsille had yet to make the acquaintance of patience.
Posted by The Plumber at 1:26 AM