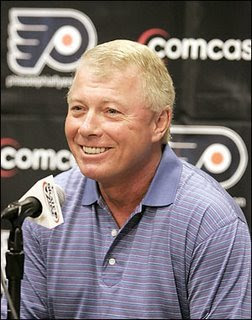 He hopes you forget his childish, public, diatribe against Eric Lindros and his parents. He hopes you forget how he handled replacing former Flyer coach Roger Neilson while on medical leave. “Roger got cancer - that wasn't our fault. We didn't tell him to go get cancer. It's too bad that he did. We feel sorry for him, but then he went goofy on us.” (Yeah, I know what you are thinking, that IS an actual quote.)

…and now he hopes you forget the state of the NHL before the lockout.

Alan Bass of the Hockey News recently published an article entitled, "Backchecking: Clarke continues legacy in front office", in which Clarke, commenting on how his team approaches staying competitive, was quoted:

“ ‘We were allowed to spend the money, we always tried to win,’ Clarke said. ‘We didn’t do what Pittsburgh did; lose seven years in a row so they could get good. They did it twice, in fact. They went through six or seven different owners. We’ve had one owner.’

Clarke finds the strategies of some current teams appalling when considering the way other organizations have built competitive teams. ’It’s somewhat embarrassing that three of the last teams (in the 2009 playoffs) missed the playoffs six or seven years in a row; Washington, Chicago, and Pittsburgh,’ he said. ‘Now they’re good and the teams that try to win all the time get penalized. Our philosophy has never changed since 1967.’ ”

Don’t get me wrong, rivalries are great for any game, but the facts, like many of Clarke’s antics, make Bobby look ridiculous.

Prior to the ’04-’05 lockout, the NHL had clearly divided into the haves and the have-nots. Never was this more evident than the ’03-’04 season when 7 of the NHL’s 30 teams had payrolls in excess of $60 million (Flyers $65.1m) and 11 had payrolls of less than $35 million (Penguins $26.6m). In fact, had it not been for the complete ineptitude of the NY Rangers that season, the Atlantic Division standings would have read as a straight roll call of descending payrolls.

The losing “seven years in a row so they (Pittsburgh) could get good” Clarke must have been referring to, are the ’99-’00 to ’06-’07 seasons, when the Flyers nearly doubled the payroll of the Penguins in that span.

Pittsburgh meanwhile, was mired in a financial disaster, created by the former ownership group, who had tried to spend like Ed Snider, but lacked the one important commodity, known as cash to do it successfully. The Penguins also toiled in the oldest arena in the league, with no promise of a new one.

Clarke was only echoing the sentiments of the aforementioned Flyers owner, Ed Snider. In 2008, after being eliminated by the Penguins in the Conference Final, Snider was quoted:

"Let's face it, you get rewarded for being the worst team in the league, so Pittsburgh has all these great players for being lousy for so many years," Snider said Monday during a rare locker-room visit. "That part I don't like so much. I've never been in favor of the draft the way it is."

Honestly, what team hopes to lose, nevermind struggle for survival for multiple years?

Did the Steinbrenner’s ever attack the Tampa Bay Rays for “tanking it to get better”? No, because even they are not that ridiculous.

It was MLB-like, situational differences between the franchises like the Flyers and Penguins that made the lockout necessary. Bobby Clarke (and Ed Snider too) just hopes you forget the details.
Posted by The Plumber at 11:58 AM