Bertuzzi Returns To the Motor City 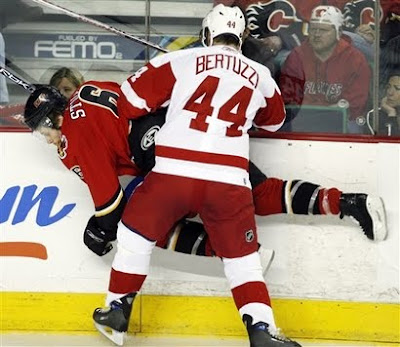 The Detroit Red Wings added some depth signing forward Todd Bertuzzi to a one-year, $1.5 million contract.
There were a few years, while playing with Markus Naslund in Vancouver, that Bertuzzi was an elite power forward. There were even songs written about him! Then the Steve Moore incident wrecked both Moore and Bertuzzi's careers.
Since then he has floated from team to team, chipping in a few goals, skating with the top lines, but has been a mere shell of his former, raging bull, self.
Detroit, like Montreal, has not had a stellar off-season losing Marian Hossa, Jiri Hudler, Tomas Kopecky and Mikael Samuelsson, replacing them with the likes of Patrick Eaves, Jason Williams and Bertuzzi. Unlike Montreal, the Wings can count on Datsyuk, Lidstrom, Zetterberg, Franzen... the list goes on and on, to pick up the slack!
Bertuzzi, 34, scored 15 goals with the Calgary Flames last season. He played in eight games with the Red Wings in 2006-07. He has played for the New York Islanders, Vancouver Canucks, Florida Panthers, Anaheim Ducks, Calgary Flames and now the Red Wings twice.
He is a nice addition for the Wings and the right price. He's no Dino Ciccarelli though, I tell ya!
Posted by The Plumber at 11:51 AM