Zherdev: quietly on the move? 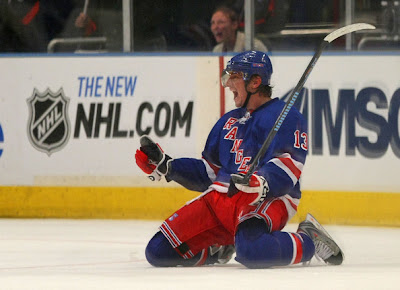 Amidst all the noise surrounding the malcontent (Heatley), the goal scoring RFA (Kessel), and the last of the big ticket UFAs (Tanguay), Nik Zherdev has quietly waited his turn for an arbitration hearing which will then determine his immediate future.
Aside from our friends at Blueshirt Banter, not much has been mentioned regarding Zherdev's impact on the market.
It has been reported that Zherdev rejected a $3.25 million contract offer from the Rangers and is requesting $4.5 million for next season. No matter what salary he is awarded today, the team is likely to decline the opportunity to retain him, as the Rangers still need to re-sign top line pivot, Brandon Dubinsky as well.
As an UFA, Zherdev, only 24, would like teams to notice that his 58 points scored from last season were in range of other players like Scott Hartnell, Brian Gionta, Scott Gomez, Olli Jokinen and Pavol Demitra, all of whom are paid at least $4 million per season.
Again we mention that there teams out there with plenty of cap space that would see adding a young, talented winger as a chance to move to the next level.
Could a return to Columbus and Rick Nash's protective shadow be ruled out? Zherdev would certainly be welcomed by the Islanders, Thrashers, Avalanche, Stars, Kings and Canucks... quietly welcomed of course.
Posted by The Plumber at 2:34 PM