What is to become of the Coyotes? 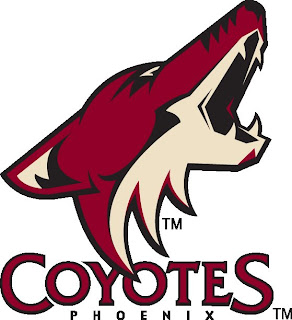 We have poked fun at the ownership struggles in Tampa recently. However, their soap opera consisting of infighting and control battles pales in comparison to the embarrassment in Phoenix.

The story begins when current Coyotes owner, Jerry Moyes, took the team into Chapter 11 bankruptcy on May 5, 2009 with a plan to sell the team, which would then relocate.

The NHL clearly wants to keep the team in Arizona and contends the Coyotes could be successful staying put. The NHL removed Moyes from all positions of authority with the team after the league was caught by surprise by the bankruptcy filing.

If that were not enough, a battle between Moyes group, which includes Coyotes coach, Wayne Gretzky and the city of Glendale, AZ (the Phoenix suburban area where the Coyotes play) rages.

Glendale claims it would be financially devastated should the Phoenix Coyotes move. The city is making the payments on the $180 million borrowed to build an arena for the Coyotes. Reports also indicate that Glendale gives a $15 million annual concession to the team.

The Coyotes claim that city officials destroyed documents that showed the team had requested repeatedly, over several months, to restructure the team's lease at Jobing.com Arena, which violated Arizona law.

Additionally, a group known as the Goldwater Institute has joined in the Coyotes bankruptcy case. The Institute is suing Glendale over the city’s failure to disclose information on concession renegotiations with potential new owners. Glendale contends that all negotiations are confidential and the demand for such information is "overbroad."

Why is the Goldwater Institute involved? They currently are in the midst of another lawsuit involving the city of Phoenix and a mall development that is also disputing city concessions.

…and yet the fight branches out even further.

The bankruptcy court has set July 24 as the deadline for submitting bids to buy the team and keep it in Glendale with the sale set for Aug. 5. If no acceptable purchaser is found, the bidding will be open to prospective buyers who could relocate the franchise.

That would reopen the door for Canadian billionaire Jim Balsillie, who has offered $212.5 million to buy the team and move it to Hamilton, Ontario. Balsillie is a minority investor with the current Moyes group, and was in the original plan to sell the team as part of the Chapter 11 filing.

Since taking control of the franchise, the NHL has announced offers by new ownership groups that would keep the team playing in Glendale.

Jerry Reinsdorf, owner of baseball's Chicago White Sox and the NBA's Chicago Bulls, with a group that includes Phoenix attorney John Kaites and Tony Tavaras, made a preliminary offer to buy the team for $148 million.

More recently, Canadian Daryl Jones told The Globe and Mail that his group, which includes businessmen from the United States and Canada, met with NHL commissioner Gary Bettman last Thursday and plan on submitting a formal offer of over $140 million.

Both groups would seek a new lease agreement and a greater concession by the city of Glendale.

Before the Jones bid, the Moyes group alleged that the NHL had discouraged other bids aside from Reinsdorf’s group, and of course, both groups’ request to renegotiate the city concession has incited the Goldwater Institute action.

So now that we are caught up on all the arguments, what shall become of the Coyotes?

Commissioner Bettman is hell-bent on keeping this franchise in the Phoenix market, but why? To save face? To somehow prove that the NHL can thrive in non-traditional markets? If Bettman succeeds in his endeavor, he only dooms the next group to financial loss and delays an inevitable request to move again.

The Coyotes have marginal fan interest. As a result, low, local television revenues, an undesirable lease agreement and poor gate receipts. Bettman insists that the Coyotes could be successful with better management and more success on the ice... Yes, but realistically, how much better can it get? Bettman has to accept that Phoenix, even if all the pieces fall into place, will only ever be a marginally profitable venture. Why would any owner want that, and more importantly why would the NHL want it with greener pastures elsewhere?

The city of Glendale loses either way. If the team stays, they get to spend even more of the taxpayer’s money on concessions and still have to pay off the loan on the arena. If the team leaves they pay off said arena and have no tenant. Which nightmare do they really want?

The best solution can only be for the NHL to buy the franchise, ala MLB and the Montreal Expos. I know that it seems ludicrous to advocate anything that MLB has done, but hear me out. The league would bring the team out of Chapter 11 and operate the franchise until an acceptable buyer is found. The league could sell the team and include a relocation fee in the agreement. As a gesture of goodwill, and to avoid future trepidation by other NHL cities, the league could use the relocation fee to help the city of Glendale offset the remaining costs involved in the jobbing.com arena loan.

No other solution offers such mutual benefit.
Posted by The Plumber at 9:50 AM