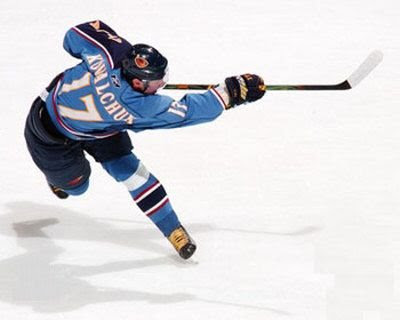 We have been very congratulatory toward the off-season moves the Atlanta Thrashers have made thusfar. Will the signing of Nik Antropov, re-signings of Colby Armstrong and Kari Lehtonen, the trade for Pavel Kubina and drafting and signing of super prospect Evander Kane be enough to convince the newest Thrashers captain to stay for the long haul?

We will find out soon enough.

Thrashers GM Don Waddell's mission is quite clear. The fact that the Thrashers do not spend to the cap limit actually places the team in an advantageous situation should Kovalchuk decide to test the market after next season, as they will have more available money to offer than almost anyone.

Yet, as AJC sports columnist Jeff Schultz points out the Thrasher have one other thing going for them in these negotiations: Kovalchuk likes being in Atlanta.

After he was named captain last season Kovalchuk embraced his leadership role. He was involved in recruiting Antropov (something a player doesn't necessarily do if intent on leaving, no?), and all anyone needs is just one visit to the Thrashers website to see how incredibly involved Kovalchuk is in the Atlanta community.

Schultz states that "Theoretically, his new deal could pay him up to $11.2 million per season (20 percent of the NHL salary cap of $56 million). The bigger issue is term"... Kovalchuk will command a generous salary, however, I would expect that his salary may fall somewhere between Columbus' newly extended Rick Nash ($7.8 million per season) and Ilya's pal Evgeni Malkin ($8.7 million per season).

Shultz concludes that "Re-signing Kovalchuk would be step one. But it’s only step one." It is THE step. Ilya means as much to the Thrashers as any player does to any other team... Crosby, Ovechkin, Nash, you name it, he means that much.

GM Don Waddell, like Harry Potter, must not fail in his mission.