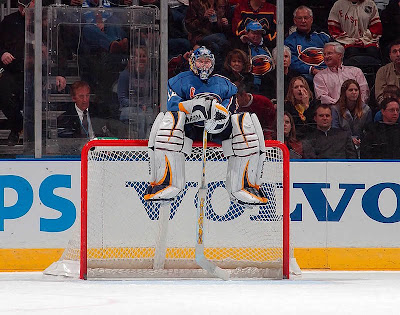 Atlanta Thrashers GM Don Wadell announced that the team has re-signed the second overall selection in the 2002 NHL draft, goaltender Kari Lehtonen. Terms of the deal were not disclosed.

Lehtonen, 25, was 19-22-3 last season, registered 3 shutouts, a 3.06 goals-against average and a .911 save percentage in 46 games.
In his career Lehtonen has a 94-83-17 NHL record with 14 shutouts, a 2.87 goals-against average and a .912 save percentage in 204 games with the Thrashers.
Locally Lehtonen is viewed as inconsistent and is criticized for his penchant for injury. However, consider that the Thrashers other goaltenders during that time have a combined record of 92-100-24 during that span.
Lehtonen's statistics seem even more impressive considering the team has only made the playoffs once during that span and have not been the model for commitment to defensive or system play as a whole.
This is an excellent move by the franchise. As the Thrashers continue to add pieces to the puzzle in front of their netminder, (Antropov, Kubina and Welch) playoff appearance number two does not look all that far away.