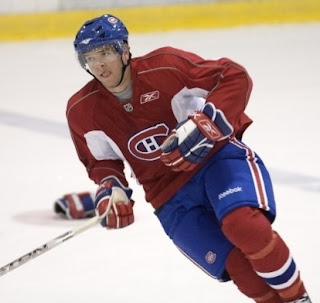 Pierre LeBrun of ESPN asks why Alex Tanguay is still on the market.

"There's a point-a-game player left on the NHL's free-agency market, but his camp will be patient before making a decision now that the first and second wave of signings have passed.

Alex Tanguay is an immensely talented forward looking for a new home after spending a season in Montreal. He had 41 points (16-25) in 50 games with the Canadiens last season while earning $5.375 million, his season marred by a shoulder injury.

"We're talking to several teams," Tanguay's veteran agent, former NHL goalie Bob Sauve, told ESPN.com in French on Friday. "Lots of teams have expressed interest. We've had a few offers, but not yet something that we want to firm up.

...but that is just it, isn't it? Where does Tanguay fit? LeBrun answers part of his own question as to why: Tanguay has not been a point-a-game player for the past two years and his goal production has been in decline for the past three years.

What is his value? Certainly not the $5 million plus he made last season. Tanguay's skills are not in question, just his production... which can be quite detrimental to the health of his wallet. Tanguay should fit with a number of teams that need offensive chances and a forward who is responsible in his own end, but don't necessarily require much edge or grit on the ice.

Tanguay should offer teams a chance to prove that at 29 he is not washed up. In the right situation Tanguay could turn the tables and have teams lining up to talk to him next off-season.