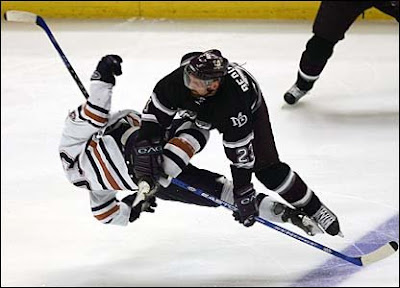 Brian Burke continues the Toronto make over.
Defenseman Francois Beauchemin has agreed a three-year deal with the Toronto Maple Leafs.
TSN says the deal is worth an average of $3.8 million per season.
"Francois will be a welcome addition to our blue line," Leafs President and General Manager Brian Burke said Monday in a statement announcing the signing. "He’s a rock-solid, steady defender that will add character to our team."
Does this move open the door to finally trade Tomas Kaberle? A deal supposedly has been in the works with Vancouver, who would seek to replace the newly departed Ohlund. The Leafs are getting bigger, tougher as Burke has promised. Will they be better? Well, it says here that with the group that they have now assembled, they won't get beat on a nightly basis from a lack of effort!
Posted by The Plumber at 6:15 PM