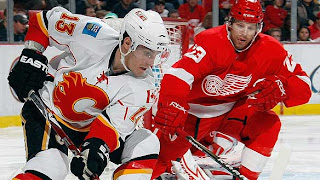 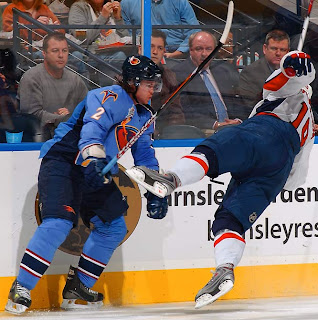 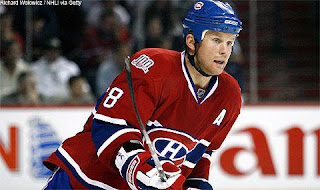 Montreal and Toronto were expected to splash the pot today and neither disappointed. The Canadiens had the most cash to blow, and boy, did they ever!
Yesterday the Habs made headlines by trading for Scotty Gomez. Today, they reeled in one of the big ones... Mike Cammalleri signed a five-year deal with the Canadiens, worth $30 million. Last season with Calgary Cammalleri scored a career high, 39 times!
UPDATE: Brian Gionta has signed a five-year, $25 million deal with the Canadiens.
The Canadiens also added two blueliners signing Jaroslav Spacek to a three-year, $11.5 million contract and Hal Gill to a two-year, $4.5 million deal.
A few days ago Brian Burke told everyone how he was going to remake the Leafs into a rough and tumble group. Burke made good on his promise by adding bruiser Colton Orr early in the day, but he wasn't done.
Toronto plucked Mike Komisarek from their nemesis, the Montreal Canadiens by signing the 27-year old, shot-blocking, bulldog defenseman to a five-year, $22.5 million deal. Burke then traded Pavel Kubina and the rights to forward Tim Stapleton to the Atlanta Thrashers for one of the games hardest hitters, defenseman Garnet Exelby and winger Colin Stuart.
If that wasn't enough, Toronto has also put in an offer for former Senator tough guy, Chris Neil. Tougher indeed!
The Edmonton Oilers, who are still waiting to find out if they have a trade for Dany Heatley, lost their starting netminder when Roloson signed a deal with the Islanders. Edmonton did not wait around long when they signed the "Bulin Wall," Nikolai Khabibulin to a four-year, $15 million contract.
The Columbus Blue Jackets have signed goaltender Mathieu Garon to a two-year deal paying the most recent Stanley Cup champion backup goalie $1.2 million per season. The Jackets also signed Sammy Pahlsson to a three-year, $7.95 million contract.
Speaking of Pittsburgh, the Penguins signed former New Jersey forward Mike Rupp to a two-year, $1.65 million deal.
Some notable re-signings included Scott Niedermayer returning to the Ducks, Erik Cole to Carolina and Steve Sullivan with the Predators.
For a full list of today's signings visit TSN's sortable free agent tracker.