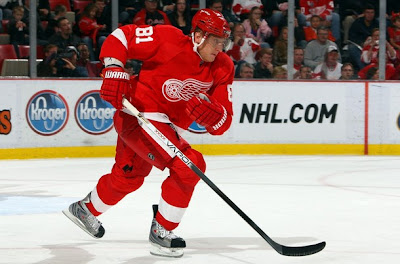 The Chicago Blackhawks have signed winger Marian Hossa to a 12-year contract averaging $5.2 million per season. The deal requires $59.3 million to be paid out over the first eight years, and $3.5 million total for the final four years. Chicago goaltender Nikolai Khabibulin is a UFA. With the Hossa deal now in place, will the Blackhawks have to let him walk... or possibly trade their other netminder Huet?
With all the hype surrounding the Hossa deal, Chicago did not stop there: signing another former Red Wing, Tomas Kopecky to a two-year deal worth $1.2 million per season.
Dwayne Roloson has signed a two-year deal with the New York Islanders for $5-million.
Roloson took over of the starting job and appeared in 63 games for the Oilers in '08-'09, posting a 28-24-9 record with a 2.77 GAA and 1 shutout.
Another goaltender, Craig Anderson has signed a two-year contract with the Colorado Avalanche. Anderson, 28, was 15-7-5 with Florida last season, posting a .924 save percentage, 2.71 GAA and 3 shutouts in 31 games.
The Buffalo Sabres have agreed to terms with defenseman Steve Montador on a two-year deal worth $1.55 million per season.
Winger Mike Knuble has signed with the Washington Capitals for two years at $2.8 million per season.
TSN reports that The Rangers have agreed to terms with tough guy Donald Brashear.
... and another goalie signing. Ty Conklin has agreed to a two-years deal with an average of $1.3 million per year with the St. Louis Blues.
That concludes hour number three. Nothing new on Kovalev or Kubina yet.
Posted by The Plumber at 2:32 PM