Kovalev to the Capital 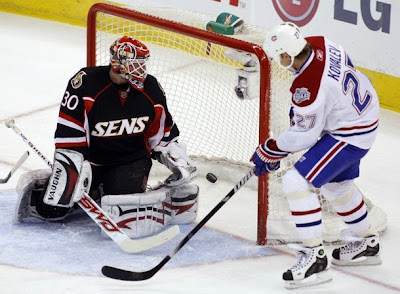 Not the Capitals in Washington... the Capital of Canada, you know, Ottawa? Where Dany Heatley may or may not be playing next season.
As reported by canadaeast.com, Alexei Kovalev has signed a two-year deal with the Ottawa Senators that will pay him $10 million.
"The 16-year veteran spent the past six seasons with the Montreal Canadiens and led the team with 26 goals and 65 points in 2008-09.
He earned $4.5 million last season and became an unrestricted free agent on July 1.
The Senators become Kovalev's fourth NHL team. In 1,151 career games with the Rangers, Pittsburgh and Montreal, he has 394 goals and 547 assists for 941 points, while adding 1,200 penalty minutes."
It's tough to analyze this move. The Sens have been through some serious drama with one malcontent, Heatley, and now have signed Kovalev, who had to be placed in "time-out" last season in Montreal because he wasn't seeing eye-to-eye with the team.
We see this in all sports. Some teams just have a magnet for guys who cause strife. Other teams would not even consider adding a guy that has a me-first track record. If this move goes south for Ottawa, don't go feeling sorry for them.
Posted by The Plumber at 5:47 PM