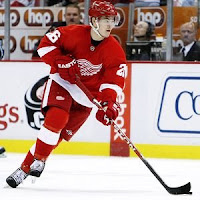 Last week Darren Dreger of TSN.ca reported on forward Jiri Hudler's situation who had signed with the KHL's Moscow Dynamo on July 8:

"Jiri Hudler remains property of the Detroit Red Wings and therefore the recent contract he signed in the KHL is being contested.
The National Hockey League has approached both the IIHF and KHL, seeking their intervention.
According to the NHL, Hudler is contractually obligated to the Red Wings for next season.
Hudler, a restricted free agent filed for salary arbitration, which in the eyes of the league is acknowledgement of his intent to play in the NHL next year.
Szymon Szemberg, Communications Director for the International Ice Hockey Federation tells TSN the IIHF is fully involved in the dispute.
'The IIHF has been informed by the NHL about the Jiri Hudler case. Upon, this the IIHF has informed the Russian Ice Hockey Federation about the NHL's position and the case is under investigation. As this is a transfer to an IIHF member league the player will be needing an International Transfer Card (ITC), approved by the IIHF, to complete the transfer. Only upon the IIHF's signing the ITC, the transfer would be finalized and approved,' Szemberg said."
The IIHF adopted new rules in the wake of last years debacle when then Predators winger, Alexander Radulov signed with a KHL team despite having a year left on his contract with Nashville.
Back then the IIHF only "urged" the KHL to void the contract. Now they will "not approve" the transfer.
Wearing the white hat through all of this, the Atlanta Thrashers rescinded their offer to Joel Kwiatkowski when it was discovered that he had already signed a two-year deal to play for SKA St Petersburg of the KHL.
There needs to be a definitive agreement in place between these two leagues that clearly defines organizational and player rights. The annual renewing of a gentleman's agreement does not work, nor does it spare the hockey world this embarrassing melodrama.
Posted by The Plumber at 7:56 AM