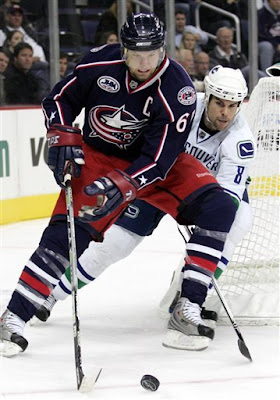 The frenzy has subsided to a nice friendly meal and some drinks. Now that the big spenders have ordered new checkbooks there is time to watch the tickers and follow the most interesting storylines.

With the Heatley drama clearly on the back burner, let us turn our attention to another goal scoring wizard who is is the midst of talks about his future: Rick Nash.
The Blue Jackets and Nash began initial discussions on an extension on Tuesday. At first, it was reported that the two sides were far apart, but the Columbus Dispatch now reports that a new deal is near and may be imminent.
"Blue Jackets captain Rick Nash hasn't signed a contract extension yet, but a deal could be struck soon. Negotiations became more intense yesterday between Blue Jackets general manager Scott Howson and Nash's agent, Joe Resnick. Sources told The Dispatch last night that the sides are not far apart.
Apparently, two offers have been discussed: a seven-year deal that would pay Nash between $8 million and $9 million per season, and a 10-year deal worth between $7.5 million and $8.5 million per season. A no-movement clause is expected to be included in any deal, meaning Nash could not be traded or waived without his approval." Read the rest of Aaron Portzline's story here.
Nash is young and the cornerstone of this franchise. Columbus made the playoffs for the first time last season. If they can secure Nash, the Jackets become a much more attractive destination for free agents to consider, but climbing into legitimate Cup contention in the West is still a daunting task for any team, even one on the rise!
Just as I write this, TSN announced:
"Rick Nash will be staying in Columbus for the long haul.
The 25-year old forward has signed an eight-year, $62.4 million contract extension with the Blue Jackets. The yearly cap hit on the deal is $7.8 million."
Posted by The Plumber at 7:25 PM