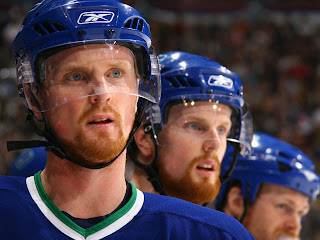 Continuing our recap of the day one signings...


As Paul Harvey used to say: "and now, the rest of the story"

Re-signed forwards Steve Sullivan and Joel Ward. Sullivan signed a 2-year deal for $7.5 million is the teams' inspirational leader after battling back from two years off from injury. Ward nearly netted 20 goals last season and represents a good value.

Re-signed role player Andy Greene. The Devils big accomplishment was made the night before re-signing Johnny Oduya. New Jersey has been linked to Chad LaRose among others. Lou will add somebody within the next few days.

Signed goaltender Dwayne Roloson to a 2-year, $5 million deal. Roloson took over the starting job last season in Edmonton. Will he grab the reigns in Long Island too? the Isles had their day in the sun at the draft, and may look to add unspectacular vets to guide their young future stars.

Signed forwards Marian Gaborik and Donald Brashear. Gaborik was the big prize that New York was looking for. However his 5-year, $37.5 contract is typical Rangers all the way. Gaborik is a dynamite talent, but he is injury prone and played less than 20 games last season. If he cannot stay on the ice for 70+ games each year, which is highly unlikely, this will just be another free agent bomb for the Blueshirts. New York also signed a ultra-high mileage goon for 2 years in Brashear, requiring the team to pay $1.4 million each year for a guy that does little more than take penalties.

Resigned forward Chris Neil. While Ottawa waited for Dany Heatley to make up his mind (what a joke), Neil turned down several more lucrative offers to return to the Sens, inking a 4-year, $8 million contract. Ottawa needs to take control of this situation, give Heatley an ultimatum and move forward.

Signed goalie Brian Boucher and forward Ian Laperriere. Boucher returns to the team that drafted him by signing a 2-year, $1.85 million deal to compete with former malcontent Ray Emery. Laperriere ads effort and energy but not the scoring touch of the newly departed Knuble. Philadelphia has made moves this off-season, signing a new goaltending tandem, trading for Pronger, etc... but i am not sure that they are any better off for it.

Signed forward Vernon Fiddler and goaltender Jason LaBarbera. You know what you are gonna get out of Fiddler: he has scored 11 goals in each of the last 3 seasons in Nashville. LaBarbera is a capable backup. Nothing flashy here. How could there be? Phoenix needs to shore up their ownership situation. Until then only minor tinkering can be expected.

Signed forward Michael Rupp. Versatile, tough guy Rupp signed a 2-year, $1.65 million contract. Rupp's signing probably indicates that the Pens will look to move resident pugilist Goddard. Pittsburgh has been busy concentrating on bringing back their own. look for Pittsburgh to stay in the hunt for Scuderi and Fedotenko, but GM Ray Shero will have plan B at the ready if those re-signings fall through.

Re-signed defenseman Kent Huskins. San Jose acquired Huskins from the Ducks at the trade deadline and then he promptly went down for the rest of the season with a broken foot. The Sharks want to see what they got in the big blueliner. Don't expect San Jose to do much other than look to add some grit to some of the forward lines.

Signed goalie Ty Conklin. The Blues get a much needed experienced backup at $1.3 million for the next 2 seasons. I expected the Blues to be much more active yesterday, and I have not heard anything on what they might be trying to accomplish in free agency regarding the talent still available.

Re-signed defenseman Lukas Krajicek and signed defenseman Mattias Ohlund and forward Matt Walker. Walker signed for 4 years, $6.8 million and provides Tampa with some two way effort, but the splash was made with defense. Ohlund, 7-years, $26.25 million. Tampa gets a power play QB and a veteran leader, but is on the hook until Ohlund is 39 years old! Time will tell and who knows what is going on in the Lightning camp?

Signed defensman Mike Komisarek and forward Colton Orr. Traded Pavel Kubina and the rights to Tim Stapleton for defenseman Garnet Exelby and forward Colin Stuart. GM Brian Burke vowed to improve his team's toughness and made the moves to do so. Komisarek was the big signing. The rugged, shot-blocking specialist signed a 5-year, $22.5 million deal. Toronto also made a solid move by adding the bone-crunching Exelby and big wingers Orr and Stuart. No matter what you may think of the moves, Toronto has a set course and have already set the wheels in motion to being a very physical team. Toronto still faces questions regarding their scoring ability and goaltending. If they are indeed able to land Swedish netminder Jonas (Monster) Gustavsson, they could find themselves on the fast track to contending.

Re-signed forwards Henrik and Daniel Sedin and signed Aaron Rome. Vancouver started the day with big news. they were able to retain the twins with identical 5-year, $30.5 million contracts. The Canucks nearly had to do this top six forwards are hard to come by and with the competition out there waiting for their services, the team signed them for a workable rate. Vancouver will certainly be seeking to compliment this signing after an encouraging campaign last year.

Signed forward Mike Knuble to a 2-year, $5.6 million deal. the Caps were expected to be quiet, but signing the guy they wanted worked to perfection. The quick and easy man-shopping

trip is now likely over as the Caps don't have much room to maneuver. Not much needs to be tinkered with on their high octane machine.
Posted by The Plumber at 12:43 PM