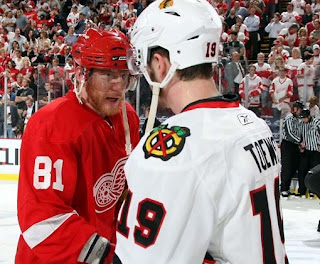 See you in July!

There were some very busy bees yesterday and some that just sat by a watched the action. Here are the first day tallies and reports for each team:

Re-signed defenseman Scott Niedermayer and forward Erik Christensen. Niedermayer inked a 1-year deal at $6 million and Christensen's terms were undisclosed. Neither signing was unexpected and both were solid, but short-term moves.

Traded defenseman Garnet Exelby and forward Colin Stuart for defenseman Pavel Kubina and the rights to RFA forward Tim Stapleton. The Thrashers swapped size and grit for speed and skill. Fan favorite Exelby was, by far, their hardest hitter and Stuart a big, young winger. However, in return Atlanta got a power play QB in Kubina, who can lug the puck and a diminutive Stapleton who has some considerable speed. The jury is out on this trade until we can see what plan the Thrashers have for this off-season.

Re-signed Erik Cole to a 2-year $5.8 million deal. Cole had no intention of leaving the 'Canes and they NEEDED to do this.

Signed forward Fredrik Sjostrom and re-signed defenseman Adam Pardy. Jay Bouwmeester counts here as well as he made all the headlines the night before. Landing the big ticket, Jay Bo gives the Flames a powerful and potent blueline, but Calgary will have to hope that their younger forwards Moss and Bourque can step up for the loss of Mike Cammalleri.

Signed prized winger Marian Hossa and forwards Tomas Kopecky and John Madden. Hossa was the signing of the day. Chicago inked Hoss to a 12-year, $62.8 million, front-loaded deal. Twelve years! Although they added a premier player, took two away from rival Detroit and added a fantastic face off man in Madden, the Hawks paid by having to let key players go in the process. Havlat, Walker, Pahlsson and Khabibulin all moved elsewhere yesterday. Chicago now possesses an impressive array of forwards, but it will be absolutely vital that mega bucks defenseman, Brian Campbell and netminder Christobal Huet play much than they did last season if they are going to be serious contenders in the West.

Signed forward Sammy Pahlsson and goaltender Mathieu Garon. Both deals were reasonable, if not unspectacular. Pahlsson brings some skill and two-way ability, while Garon gives the Jackets an experienced backup to their super-sophomore, goalie Mason.

Signed goaltender Craig Anderson and forward David Koci. Anderson, who played extremely well last season in Florida, agreed to a 2-year, $3.6 million deal and will be counted upon to assume the staring job in Denver. The mammoth 6'6", 238 lb., Koci brings...ummm, shade? Anderson was an excellent and economical signing for the 'lanche. Low risk, high reward!

Nada. A surprise really. I expected them to be uncharacteristically busy yesterday. Nope.

Lost players to Chicago and St. Louis. Not like they need anyone.

Signed netminder Nikolai Khabibulin and re-signed Jason Strudwick. the Oilers waited around all day to see if they could convince Dany Heatley to accept the trade to play there. No dice. Yet they did upgrade at goaltender, bringing in the super streaky "Bulin Wall" at a reasonable $15 million over 4 years.

Re-signed forwards David Booth and Radek Dvorak and signed goalie Scott Clemmensen. Booth is a gifted scorer and maybe Florida's most important player. Locking him up with a 6-year, $25.5 million contract will seem a huge bargain down the road. Dvorak is a known commodity and fills a role at minimal cost. Clemmensen provides an excellent fill-in at goaltender when needed. It will be interesting to see how the team handles losing Jay Bo.

Nothing at all! They tried and tried at all the big names and came up empty.

Signed forward Martin Havlat and defenseman Greg Zanon. Havlat will essentially be replacing Gaborik for a lesser fee. The winger signed a 6-year, $30 million contract. Zanon gives the Wild a girthy, physical presence at an acceptable rate of $1.93 per season for 3 years. Minnesota will continue to make more moves in the next few days, as they are known to be pursuing Ruslan Fedotenko and Rob Scuderi.

Signed forwards, Brian Gionta and Mike Cammalleri and defensemen Hal Gill and Jaroslav Spacek. The Canadiens spent their money! After trading for Scott Gomez and his $7.357 million cap hit, Montreal added Cammalleri's $6 million for the next five years and Gionta's $5 million over the same term. That is more than $18 million each year for just 3 guys! Gill and Spacek give the Canadiens size and veteran leadership. Cammalleri was easily their best move, but even he is no guaranteed success! Montreal need to hit home runs with this money and they fell short of the fences. After his stint with the Rangers, I just don't see how Gomez lives up to his pay rate. In Montreal that is a bad, bad thing! GM Bob Gainey might have just punched his ticket out.
Posted by The Plumber at 9:18 AM