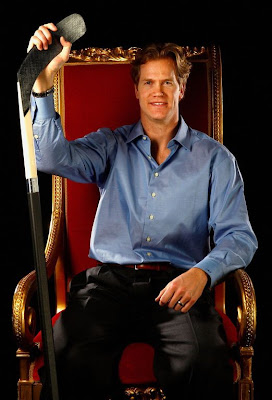 "It looks as though Chris Pronger may finish his career as a Philadelphia Flyer.

Pronger's agent Pat Morris said on Tuesday that his client has signed a seven-year contract extension with the team worth $35 million. The contract also includes a no-movement clause, meaning Pronger, 34, is likely to wrap up his time in the NHL as a member of the Flyers.

'I am very excited to be able to retire a Philadelphia Flyer and I am looking forward to many years with the Flyers logo on my chest,' Pronger said in a statement.

'We are pleased to have one of the NHL's premier defencemen in our organization and under contract long term,' said Flyers general manager Paul Holmgren. "

'When we made the trade for Chris, it was our intention to get him signed to an extension and we are glad we could come to this agreement.'"

With all apologies to Flyer fan, Paul Holmgren and Mr. Pronger, the Flyers do NOT "have one of the NHL's premier defencemen in" their organization as a result of this signing. He will be 35 next season, playing a 16th season. To his credit, his point production has remained fairly consistent over the last few seasons. Yet anyone who watched him play in the playoffs last season saw Pronger frustrated playing against skilled players, taking more than a few dumb penalties particularly against Detroit.

Now, Philadelphia does boast about physical play, intimidation and guys with a penchant for racking up suspensions... he does seem like a perfect fit for the Raiders of the NHL. However, when facing the likes of Crosby, Malkin, Ovechkin, Semin, Gaborik or Parise in the playoffs... when it really counts will Philly boast of games won or games suspended I wonder?
Posted by The Plumber at 9:20 PM