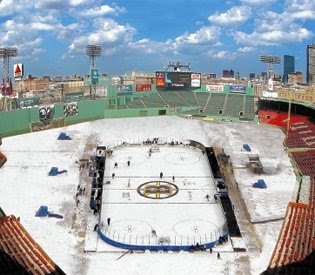 What suspense! Ha! The worst kept secret in sports will officially be "revealed" today that the Boston Bruins will host the next Winter Classic on New Years Day at Fenway Park.

The only bit of mystery is the Bruins opponent. The Washington Capitals and Philadelphia Flyers were supposedly the two finalists for the gig, but wouldn't you want a natural, division rival in that spot, say like... the Canadiens if you were a Bruins fan?

Here's to hoping its Alexander the Gr8t and the B's on January One. I'll be there either way!
Posted by The Plumber at 9:38 AM