Dancing Partners: Isles and Hawks made for each other? 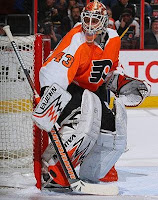 Recent events have the ol' gears a turnin'...
The Isles have signed free-agent netminder Martin Biron to a one-year contract worth $1.4 million. The team now has three starting goaltenders after adding Dwayne Roloson on July 1st.

Could this mean Rick DiPietro is being shopped? NO WAY! The perennially injured franchise 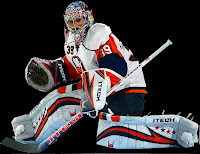 backstopper is signed to a 15-year deal through the 2020-21 season which pays him $4.5 million each year. (Side note: the Isles love doing this as they are still paying the perennially injured franchise forward Alexei Yashin through the 2014-15 season. If you haven't been following the Islanders closely, Yashin hasn't played for them since 2007.)
Well... what does it mean then? Most likely it means that DiPietro, who appeared in a whopping 5 games last season is not ready to play. However, it could signal that the Islanders will attempt to play 3 goaltenders at once, because whether uber-rookie John Tavares plays or not, the team will struggle to score goals this season.
Yet, help in the goal scoring department is out there. The Islanders certainly could sign free-agent winger Alex Tanguay. The team possesses nearly $20 million in cap space. But what about the trade market?
The Chicago Blackhawks are technically over the cap right now. With a glut of forwards (15 to be precise, with 12 making at least $1 million this year) and potential free agents next season by the names of Kane and Toews, the Hawks have to make a deal. So why not the Isles? 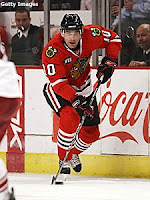 It is quite logical really. The Islanders need scoring help, have loads of cap room and always seem to find their way to the top of the draft each season. Would this not be an attractive scenario for Chicago, as the Blackhawks would need to unload some higher priced payroll with having to take back any salary in return? Patrick Sharp's $3.9 million dollar deal in return for a low round, potentially top draft pick perhaps? I'm no rumor monger folks, but the stars align pretty well for this, don't they?