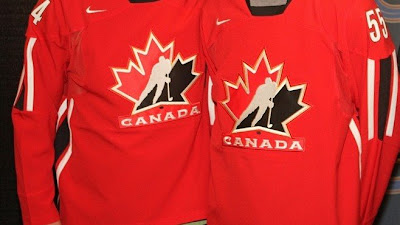 I was reading a piece on the Leafs and scrolled through the readers comments and noticed this:
"...I'm a Habs fan I want the Leafs to come to the playoffs because more Canadian teams mean more chances of winning a Stanley cup from a Canadian team."
What is this, and can the class please tell me what is wrong with this statement?
This just does not work for me on so many levels.
Before we move forward, let me preface this by saying, I get the whole national pride thing, but...
1.) You are ok with a rival team winning it all?
Really? Canadiens fan is cool with Ottawa or Toronto hoisting the Cup after watching the Habs bow out in round one? I know when my team fails in it's bid for the grail, it does my heart no better to see another U.S. based team win it... and certainly, it would sicken me to see a divisional rival take the Cup away from my team.

2.) Can the NHL become more of an international game?
Not to belabor the point, but just as an example: The "Canadiens" roster features 11 Canadian born players who skate along side 13 non-Canadian borns, made up of 5 U.S., 3 Czech, 2 Belarus borns, a Russian, Swiss and Slovakian born. Incidentally, Les Canadiens are Canada's least Canadian team.

3.) What if?
The Flyers, who boast 16 Canadians and 4 nons, were to defeat Toronto (12 Canadians), Ottawa (13 Canadians) and Montreal (11 Canadians) in successive rounds on their way to the final? What part of Canada is doing the winning and losing here?
Don't you want to see Canada triumph in the Olympics and the World Championships? Sure you do! But don't go pledging allegiance to another NHL club until you know where they were manufactured, ok?
No offense. Hope I haven't cooked it here. I don't mean to be a hoser, eh? Je suis désolé très.

*No geese, beavers or moose were used in the testing of this post.
Posted by The Plumber at 11:35 PM