Will the Number 1 pick lead Long Island to the Lighthouse? 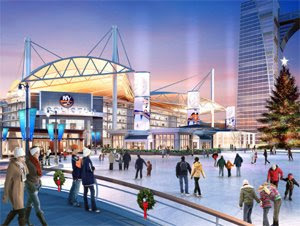 Once a proud and powerful franchise, the New York Islanders have fallen into relative obscurity. Twenty-five or so years ago, the Isles were dominating the NHL. They were winning Stanley Cups, stocking and re-stocking their roster with future Hall-of-Famers and packing out the Coliseum with rabid, Dennis Potvin sweater clad fans every night that the team hit the ice. In 2009, the Islanders will give you free tickets to a game if you buy their Greatest Games DVD. (This is no joke!) Locally, the Rangers and Devils have been playing in a different league, winning Cups and relegating the Isles to red-headed stepchild status.
Back in May, Isles owner, Charles Wang told Newsday that he regretted purchasing the team. That was when his Lighthouse project had been ignored for the past 5 months. On June 2, 2009, just a few weeks later, Wang finally met with Nassau County officials to discuss what benefits his project may provide to the community. According to Wang, he has reason to be optimistic that his project, 7 years in the making, could happen.
Riding this wave of optimism and with not one, but two selections in the first round of the 2009 NHL Draft, including the first overall selection... what do you do if you are the Islanders? Throw a party, and invite 18,000 of your closest friends of course!
You have to hand it to the Isles. It is now more important than ever to impress the notion that the team is still relevant in the community, and they have played their cards right. GM Garth Snow has done his very best to create drama and intrigue by keeping the teams' No. 1 selection shrouded in mystery. The draft day party will feature appearances by current players and Islander HOFers like Mike Bossy and Bryan Trottier!
So whether it be John Tavaras, Victor Hedman or Matt Duchene that pulls their sweater over their head on draft day, the Islanders will win because they made it an event! Good for them and good for the NHL if one of their struggling franchises can again become a "beacon" at the Lighthouse.
Posted by The Plumber at 11:10 PM