Who didn't see this coming? 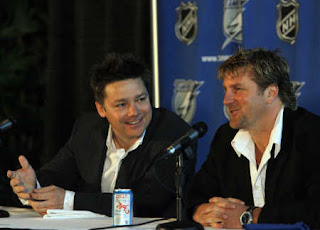 It was just a year ago that the jolly group of investors that included Len Barrie and Oren Koules, among others, were to take the reigns and change the fortunes of the 2004 Stanley Cup champions. Shortly thereafter, the hockey world was treated to the beginning of their sports soap opera. Even the NBA's favorite owner, Mark Cuban, must have wondered: "What are these jokers up to?", as their first few months at the helm in Tampa transpired.

They began by extending defenseman, Dan Boyles' contract giving him a hefty raise in the process. Then, immediately began to shop him. Boyle was not so discrete in voicing his displeasure of how his situation was handled. In response, Barrie very openly let the world know (and I'm paraphrasing here) that he is the boss and will ship his human capital anywhere he pleases, whether they like it or not. Who would ever think that Len Barrie would be a hard guy to get along with?

Brian Lawton was ushered in as GM, pushing aside the popular Jay Feaster. They hired Barry Melrose to coach, after a hiatus long enough to be more well known as "the hockey guy" from ESPN than the coach who put Gretzky and the L.A. Kings in the 1993 Cup Final. How could that strategy fail?

Next, after clearing cap room by moving Boyle to the Sharks, the Lightning splashed the headlines by signing free agent after free agent: Ryan Malone, Gary Roberts, Vinny Prospal, Radim Vrbata, Olaf Kolzig, Adam Hall, Evgeny Artyukhin, Mark Recchi, etc... With a new front office, new coach and a gaggle of new players the Lightning struggle mightily to start the season. Barry Melrose is fired, and who would have guessed it... Melrose and Barrie feud in the media!

Fast forward to June of 2009, now Barrie and Koules are at odds over control of the team! As detailed here by the St. Pete Times' John Romano, the two "are scheduled to have a meeting today with NHL commissioner Gary Bettman to determine which one of them will have the authority to make decisions for the franchise. In essence, the commissioner is determining custody of a hockey team." Who woulda thunk???

* Mirtle and Wyshynski both beat me to the punch on this. Interesting take from both of them as they have debated about the Barrie/Koules marriage before!
Posted by The Plumber at 6:34 PM