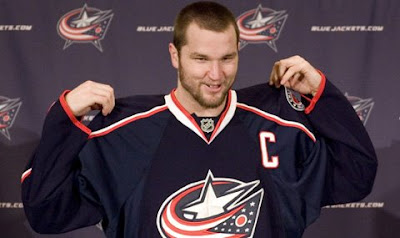 Continuing our 11th hour signings and discussions here are some recent happenings:
The Columbus Blue Jackets have opened talks on an extension for team captain Rick Nash.
Vancouver Canucks general manager Mike Gillis flew to Sweden, met with Sedins for two hours, and presented his team's offer before flying back to Vancouver.
The New Jersey Devils signed Johnny Oduya to a multi-year deal reportedly worth $3 million to $3.5 million per season.
CBC reports that Mike Komisarek's agent announced Komisarek will test the open market.
More on Marian Hossa's lowball offer from the Red Wings.
The Flames are expected to make a formal offer to Bouwmeester today.
Posted by The Plumber at 4:22 PM