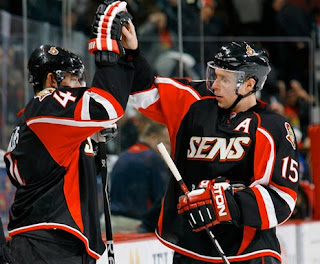 The Edmonton Oilers have struck a deal with Ottawa that would send Andrew Cogliano, Dustin Penner and Ladislav Smid in exchange for Dany Heatley.

The trade is contingent upon Heatley waiving his no-trade clause.

TSN reports: "Sources say Dany Heatley has been asked to waive his no-trade clause to go to Edmonton in exchange for Andrew Cogliano, Dustin Penner and Ladislav Smid.

If Heatley agrees to waive, it would appear the Sens and Oilers will have a deal, pending the official trade call with NHL central registry, but that is generally a formality."

This is it for Heatley. If he declines, there will be no other opportunity for him to leave Ottawa as he has requested. Stick a fork in it!
Posted by The Plumber at 10:44 PM