As we mentioned the other day, the off-season is fun! If you look around the web, you will find countless message boards with fans of each team that have their own ideas on how to fix what ails the team that they cheer on each game.

The Hockey Plumber will attempt to explore the cap and player situations that affect each of the 30 NHL clubs for the upcoming 2009-2010 season. We will analyze what each team has committed to the cap, how many players are currently signed and what areas will have to be addressed before they lace ‘em up next October.

The 09/10 NHL salary cap has not been officially announced yet, so we will use last years cap as a guide, with a marginal, 5% increase expected.
We will start with the Stanley Cup Finalists and two other teams that are expected to be busy over the next few months. 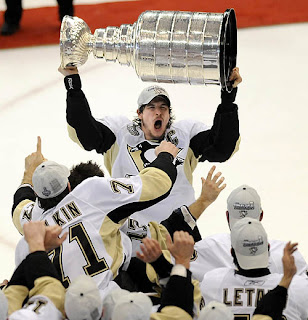 Roster situation: The Cup Champs addressed their future at the blueline by signing Alex Goligoski to a 3-year deal this week. Clearly the Penguins will rely on Goligoski and Brooks Orpik over the next few years, and will no doubt look to extend both Letang and Gonchar to keep that defensive unit solid. However, question marks surround Hall Gill and Philippe Boucher. The Pens would like to retain them, but in all likelihood, they will have to play practically for free to stick around. Ben Lovejoy is well liked in the organization, is a strong defender and could be retained at a modest price. The (literal) multi-million dollar question will be what happens to Rob Scuderi. “Scuds”,”The Piece”, whatever you want to call him, will be a hot commodity after his sparkling playoff performance and his scintillating “save” in the Final. The Penguins will not be able to pay him the money they invested in Orpik last year, and the buzz surrounding Scuderi may hoist him to that pay level on the open market.

Forwards Sykora and Satan are as good as gone and can be crossed off the list. It has been talked about that the team has already made modest offers to both Guerin and Fedotenko. Both do seem genuinely interested in returning for another shot at a Cup run, but don’t want to leave too much money on the table. The defending Champs also seem keenly interested in retaining Mike Zigomanis who was spectacular in the face-off circle before his injury. His playing style should fit nicely with coach Bylsma’s system which emphasizes speed and the forecheck. No one else up front seems to be a priority for them at this point.

In the net, Garon will simply be too expensive to retain at his most recent price tag. The organization likes John Curry and will more than likely be re-signed and given the opportunity to backup Fleury.
The sexy story: General Manager, Ray Shero vaulted the Penguins into the Final and into the big ticket spotlight with his acquisition of Marian Hossa at 2008’s trade deadline. Thereafter, the Penguins have been linked to the spectacular trade/FA rumor whenever a big name pops up. This off-season look to see Marian Gaborik’s name linked to Pittsburgh, especially if he starts talking about taking less money to play with a contender ala Hossa. The Minnesota Wild’s new GM is former Pittsburgh Assistant GM, Chuck Fletcher and there already has been rumbling about possible draft day swaps between the two clubs. Another “name” linked to the Penguins, Jack Johnson. The current LA Kings RFA defenseman is the closest friend to one Sidney Crosby, and JJ has made no secret of his interest in playing with his BFF. Ray Shero has proven himself to be a world-class, wheeler dealer in his short tenure with the team. Expect him to do something unexpected and keep his team with the elite.

Roster situation: The 11-time Champions are in a bit of a pickle. To Hossa, or not to Hossa? That is the question. With the current make up of the team, to sign Hossa would mean getting him to sign a deal with a friendlier cap number than the 1 year deal he had last season. Hossa led the Wings in goal scoring during the regular season. After a slow start, he turned it on during the playoffs only to completely disappear in the Final against Pittsburgh. He is an ideal fit on this team with his scoring ability, speed, puck control and defensive ability. However, would keeping him prevent the Red Wings from retaining three important spokes of the winged wheel: Jiri Hudler, Mikael Samuelsson and

Defenseman/Methuselah, Chris Chelios will be 48 next season and is the only current Wing’s defender on which they will have to make a decision. If the cap doesn’t allow, he will not be back.

Ty Conklin was a terrific backup to Osgood last year. Detroit has talent behind him in the minors, so if he wants a shot to come back, Conks will have to be reasonable in his demands.

The sexy story: Does it get any sexier than the Big Red Machine? Everyone wants to play there. Who wouldn’t? Marian Hossa will hold all the cards in how this off-season plays out for Detroit. If he will again take less, at least, up front, they will be able to bring back Leino and Hudler and keep the machine rolling. Expect Hossa to make the Wings wait a bit after July 1 so that he can gauge his value with the Bruins, Canucks, Oilers, Kings, Canadiens and other teams willing to offer him the mega bucks. No doubt, GM Ken Holland, who is nothing short of a genius, will let the pieces just fall to him and find another star to play at the Joe for way less than market value if Hossa decides to “Take the Money and Run.”

Roster situation: Lets face it, the Habs just are not what they used to be! Les Canadiens were the franchise of the NHL. 24 Stanley Cups, All-World, Hall of Fame rosters, a rabid fan base and an intimidating home ice advantage. They have drifted into also-ran territory and face a daunting possible rebuilding year. Can it work out? Yes. Will it be easy? No! Montreal is no longer loaded with prospects and young players, so they seem unlikely to pull off a blockbuster trade. The Kastsitsyns and Andrei Markov are their most coveted assets and they would seem a bit foolish to trade away the only core that they possess. No doubt, the Canadiens will be VERY active in signing players with somewhere in the neighborhood of $32 million + in cap room. Yet, which players and how much they will have to pay them to play in the pressurized, tax-heavy Quebec province remains a mystery. Alex Tanguay was brought in last year to push them over the top. He stunk and will not be back at the inflated cap number he played for last year. Longtime captain, Saku Koivu has battled injuries and may have had his fill in Montreal. Lang is getting old and would have to take a reduction in salary to stay. Kovalev is another question mark, as he had to be placed in “time out” last year. He also may have played his last game with the team. Chris Higgins fits what the Canadiens do, so look for him to re-sign with a modest raise.

On the blueline, Mike Komisarek, the rugged, shot-blocking, wrecking ball will attract a ton of interest from other clubs, but no one has more money to spend than Montreal. Schneider is a coach on the ice and a viable defenseman, but will need to take a pay cut to continue on. The Canadiens need to sign defenseman (there are only 4 currently on the roster), so expect them to bring back Bouillon, Dandenault and maybe even consider Brisebois too. The goaltenders are signed, but look for them to talk to both Price and Halak about extensions now.

The sexy story: Above I asked what was sexier than the Wings… how about more than $32 million in cap space? Because of their available cash, and probable need to overpay, expect Montreal to talk to every big name looking for work on July 1. Hossa, Gaborik, the Sedin twins, Cammalleri, Antropov up front. On D, Bouwmeester, Ohlund, etc… No one has more to spend! Even if they don’t have a lot to trade, they will be talked about in connection to Dany Heatley, Vinny Lecavalier, Daniel Briere and any other player that speaks French! Either way, Montreal will have a transaction list a mile/kilometer long!
Atlanta Thrashers

Roster situation: Atlanta is intriguing for many reasons. Their ownership group is still in flux. They have a 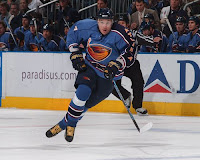 ton of cap space, but probably will not be allowed to spend much more than half of what is available. This is a textbook example of a crossroads season for a franchise. If they make the right moves, they may be able to convince new captain, Ilya Kovalchuk to stay with the team after next season. If they do not, Thrasher fans will need to pray for a miracle along the lines of Fleury, Malkin, Crosby and Staal, or their owner(s) will be touring the Sprint Center in Kansas City very soon.

The good news? They have available cap space, 15 players already signed and no UFAs that need to be signed. Eric Perrin is really the only UFA of note and he wants out. Colby Armstrong had a solid 22 goal campaign and possesses natural leadership qualities and grit to go along with a reasonable price tag. Slater and Thorburn are hard workers and will not cost any more than last year to retain.

Valabik is a hulk of a defenseman. Big guys take a little longer to find their NHL form, so retaining him for his overall potential is necessary for the Thrashers, who have a legit core of blueliners.

Kari Lehtonen is an RFA, but has struggled with injury and inconsistency. The Thrashers cannot afford to keep him if he does not prove to be the guy that got them to the playoffs a few years ago. Yet they also cannot afford to have him go elsewhere and finally reach his potential wearing another team’s sweater! This is a key decision.
The sexy story: Atlanta is Montreal Lite, or Diet Canadiens… Just like the much more storied franchise, they will have to overpay and have the room to do it. They MUST and will also be linked to every big name, with the possible exception of Hossa (he already served time there)! Commissioner Bettman has been wrapped up in the Phoenix saga the past few months, but he better pay very close attention to what happens with the Thrashers this year. If ownership does not preclude GM Don Waddell (and Rick Dudley???) from actually doing what they pay him to do, they actually land the right pieces, and make Ilya happy in the process… the Thrashers are the NHL’s feel good story of the year. If not, does the Hamilton Thrashers sound right together?

*cap info based on numbers provided at: www.nhlscap.com/
Posted by The Plumber at 5:48 PM