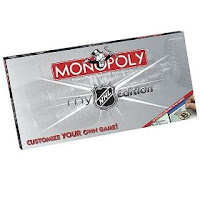 Happy err Father's Day? I know, kinda late, but it's the thought that counts, right?
We continue our state of the franchise segment going coast to coast with New York and L.A.

Roster situation: The Kings are interesting because of their unique positioning in the marketplace. They have 19 players under contract. Most of their young stars are signed to long term agreements… and have a decent amount of cap space available. Their Free agent forwards, Calder and Armstrong are not big offensive producers, so look for L.A. to wait to see who they may be able to snare before committing anything to them in the way of re-signing.

On the blueline, Jack Johnson has been linked to many trade rumors and Gauthier could certainly be replaced with cheaper labor.

The Kings have no free agent goaltenders, but that will not prevent them from seeking an upgrade at this position.

The sexy story: JJ is a RFA, and their leading goal scorer from last season, Alex Frolov, will be a free agent next season. What does this mean? With their current cap situation, the Kings will be plenty active this summer. Many reports include L.A. as a leading candidate to land Dany Heatley, with Johnson as part of the package. Whether Frolov shows interest in extending his contract or not, L.A. will certainly pursue the big names at forward. Either Marian would fit nicely in So Cal. Look for the team to consider the goaltending position as well. Khabibulin will look to cash in on his strong playoff run. Marty Biron will almost definitely be available for a look as well. The Kings have an opportunity to make big strides this summer and position themselves to contend in the West next season.

Roster situation: The Rangers have a good bit of cap space this season. What??? The Rangers? Yes…but before you get too excited, they only have 9 players under contract at the moment. The team has the opportunity to stop the cycle of overpaying for players in the Big Apple, but the albatross cap

numbers for Gomez, Drury, Redden and Rozsival will weigh heavily for quite some time. The Rangers did make excellent moves to bring in Zherdev and Antropov last season, but will likely have to let at least one of those two walk. The Rangers will attempt to give away Gomez and/or Drury, but really folks, what team would want to take on that much salary for either of those guys? Additionally, they need to retain Dubinsky, Callahan and Betts, as their production and effectiveness far outweigh their cost! They will be looking for increases, but all three represent excellent values to this club.

The Rangers also need to sign defensemen. There are only 4 inked at the moment. Morris and Mara would be a luxury, as the Blueshirts may have to look at giving youth a try here, or bargain basement types for the time being.

In net Stephen Valiquette is unrestricted, but the team really only needs spot duty to backup their All-World starter.

The sexy story: This is the RANGERS that we are talking about here. Realistic or not, New York is always in the conversation. With so much uncertainty surrounding the team’s makeup, they could fall off the map, or make significant strides in protecting their long-term future. Nearly $26 million is wrapped up in just Gomez, Drury, Redden and Rozsival, until the conclusion of the 2012 season. This is the opportunity for the team to invest in young effective players that splash the stat sheet instead of the newspapers.
Posted by The Plumber at 12:52 AM