We continue on with our team by team off-season reports... this time by popular request: 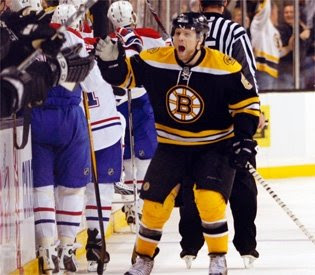 Roster situation: The Bruins are in nearly the same place as the Red Wings. Their cap commitment and players under contract are essentially the same. They both have a backup goaltender that likely will not be back and a high scoring forward that will determine what direction in which the team can proceed.

So, what to do about Phil Kessel? The team knows that 21 year-old, 30+ goal scorers are rare these days. However, with Boston so close to the cap, they will be unlikely to match his contract demands without making other moves. Aside from Kessel, serviceable forwards like Axelsson, Recchi and Yelle will have to wait until the other pieces fall into place before they learn where they fit in the team’s plans. One more thing, Wacey Rabbit is a RFA. When your franchise gets a hold of a player with a name like Wacey Rabbit, you NEVER let them go!

On the blueline Steve Montador and Shane Hnidy provide some value, particularly Montador, but they are replaceable.

Beantown’s “other Manny,” Fernandez was a hefty chunk of cap room last year. He did make for a formidable tandem with Vezina Trophy winner, Tim Thomas, but there is no way he is back with this team. Kevin Regan is a hometown product from “Southy.” Regan is an ECHL system guy, so if he is in their plans, it is long-term.

The sexy story: The Bruins do have a serious decision to make regarding Kessel. I compared their situation with Detroit’s comparing the Wing’s cap dilemma concerning Hossa. Yet Kessel is nearly 10 years younger than Hossa and was counted on to contribute in a greater capacity by Boston. It’s a big deal, folks.
Enter Dany Heatley. The Heater put the Bruins on his wish list and could allow the Bruins to unload their “problem”, packaged with some other players for the Senator’s “problem” and some draft picks. The team has made significant positive strides from just a few years ago. This past season they finished with the top seed, the top coach, the top defenseman, the top goalie, but were bounced in the second round of the playoffs. They will seek to correct that to make a serious Cup run next season.
Posted by The Plumber at 5:35 PM