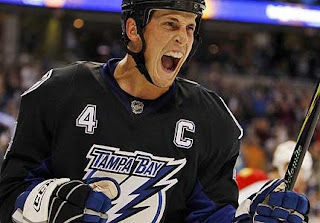 NHL Commissioner Gary Bettman addressed the Board of Governors today on a variety of topics, which was highlighted by the Molsons' purchase of the Canadiens and the soap opera in Tampa.

Regarding the Lightning, NHL.com staff writer, Adam Kimelman writes: "Bettman addressed speculation over the ownership situation with the Tampa Bay Lightning. Recent reports have suggested that co-owners Oren Koules and Len Barrie were not speaking. Bettman had the pair in his New York office Tuesday, and the commissioner said he was confident that whatever differences of opinion the two might have can and will be ironed out in time."Things are OK right now," said Bettman. "They're speaking and they sat at the Board meeting next to each other. They may, long-term, have some issues they'd like to resolve, (but) things are stable and OK right now. I think ultimately whatever's going on can be resolved. The owners are in a position where they're working together right now. They each understand what they need to be doing. Whether or not that changes in the future is up to them to decide, ultimately."

...umm, ok? Sounds like commissioner-speak for: "they behaved themselves while in detention, but who knows how this will all end up?" Thanks Commish! Way to put that issue to bed!

NHL.com Columnist, Larry Wigge then adds Tampa GM, Brian Lawton's take on the team's ownership: "... Lawton admitted he was caught off-guard by the stories... 'I was. I was. Sure. Absolutely,' he said in an impromptu media conference at the Sheraton Centre Hotel in Montreal, adding that he remains the general manager of the Lightning... 'I make the decisions. It's a non issue. A non-factor to me.' "

...and later addressing the rampant trade rumors surrounding star player Vinny Lecavalier: "I think I've said all there is to be said about Vinny and the Lightning. He's still a player on our roster and we're excited about that.'It's status quo for us. No ... new ... information.' He said the last three words with emphasis."

...umm, ok 2.0? So when speaking about the ownership battle for control, the GM steps to the mic to inform us the HE makes the decisions. THAT sounds like everyone is on the same page, doesn't it?

Then... umm, ok 3.0? "No... NEW... information" Well I'm sure every Lightning fan around the globe will sleep well tonight now that such an emphatic point has been made regarding the franchise centerpiece! err... wait, was that a maybe there will be different information later?

Thanks guys! No more rumors or speculation necessary. We are all wrapped up here!