How do you keep an idiot in suspense? 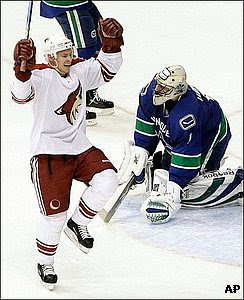 http://panthers.nhl.com/ stated that they had "breaking news" to be announced within the hour, a short time ago.

All of us, I'm sure, must have believed that they were able to work out a deal with their uber free agent-to-be, Jay Bouwmeester, or at least we would find out that they had traded his rights to an over-eager suitor, but instead:

"Florida Panthers Assistant General Manager Randy Sexton announced today that the club has acquired the exclusive negotiating rights for the Phoenix Coyotes C Steve Reinprecht (REIGN-prehkt) in exchange for Florida Panthers prospect C Stefan Meyer. In addition, the club announced they have agreed to terms with Reinprecht on a three-year contract..."

Nice deal for the Panthers, but certainly not the announcement that this "idiot" expected!
Posted by The Plumber at 2:56 PM