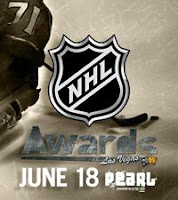 Most importantly, how did the plumber do with the predictions? Seven of eight! Not bad. I stated that the Norris would be the tightest race, and Chara, who I thought had the least chance of winning, did.

"What were the highlights then?", you ask...

Tim Thomas had a very moving speech. He was obviously the most flattered to have won any award tonight. The retired Kirk Muller was as nervous as could be, lucky for him, his fellow presenter, some "actress/supermodel" I did not recognize nor even heard of, saved the day.

One vocal performance of note: Chaka Kahn is HUGE!!!!! She did some NHL fan photo tribute that barely featured NHL fan photos, while screaming her um, song..."Through the Fire." To add to the spectacle, she was all dolled-up in a ridiculous and embarrassing metallic gold ensemble, that I guess, was supposed to cover the fact her backside forced her to enter the Palms through the delivery entrance!

Next year I'll host and spice the whole thing up a bit!
Posted by The Plumber at 9:13 PM