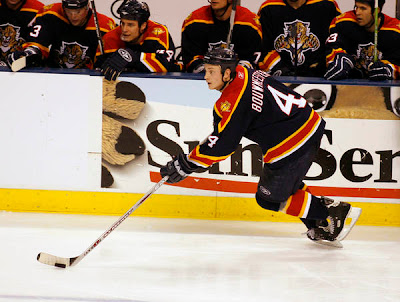 TSN is reporting that Jay Bouwmeester has signed a five-year contract with Calgary.

"Calgary Flames general manager Darryl Sutter made the most of his opportunity to negotiate with Jay Bouwmeester.

The defenceman avoided unrestricted free agency by agreeing to a five-year deal worth $6.6 million per year against the salary cap on Tuesday night."

They also have reported that the Dallas Stars have re-signed right wing Jere Lehtinen to a one-year contract. The deal includes a $1.5 million base salary, and as much as $1 million more in incentives.

I'm sure there will be more happening tonight...stay tuned!
Posted by The Plumber at 9:20 PM