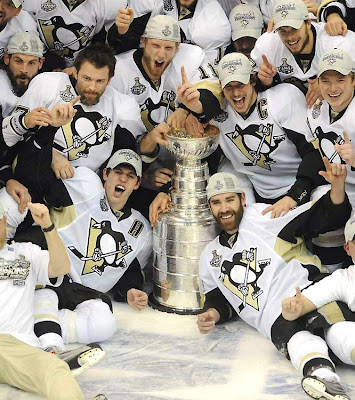 The 2009 NHL season came to an end last Friday night. Anyone reading this was probably watching. There has been so much written about the series, even the postgame: Sidney Crosby being the youngest captain to hoist the Cup, his "snub" at the handshake, Malkin's MVP performance, Marc-Andre Fleury's vindication, Max Talbot's goals, Lidstrom's surgery, Hossa's ineffectiveness and his "wrong" choice of teams, the road team winning a Finals game 7 for only the third time in NHL history... the storylines go on and on.
Yet, you will only see this story here: The rematch of 2008's final was a numerologists dream!
1.) 2009 featured identical teams from 2008. (duh).
2.) Games 1 and 2 were won by the Red Wings just as they were in 2008.
3.) Games 1 and 2 were won by identical scores: 3-1, Detroit.
4.) Games 3 and 4 were won by identical scores: 4-2, Pittsburgh.
5.) Game 5, the outlier, was won 5-0.
6.) Games 6 and 7 were won by identical scores: 2-1, Pittsburgh.
7.) Number 87 won the Cup on the 87th game of the 2009 NHL Playoffs.
Just imagine what a 3-peat match up might bear out in the numbers! Get out your calculators and slide rules!
Posted by The Plumber at 6:44 PM