Alright, because we have to... 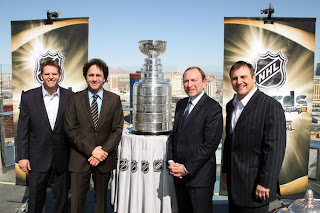 The 2009 NHL Awards will be held at the Palms in Sin City, Las Vegas. It will actually be on tv, for the 1.045% of you who actually get Versus, it's on at 7:30 pm Eastern. Why is it in Vegas? Maybe to actually entice the players to show up? Maybe because for years there has been much banter about Vegas being a home to an NHL franchise. (Could the Coyotes be the Vegas 'Yotes and still play in Glendale, AZ?) Maybe because the Maloof brothers, pictured above with NHL Commish Gary Bettman, who own the NBA's Kings and the Palms...and 1/2 of all Las Vegas, are exploring their NHL possibilities?

Well whatever the reasons, here is how I see the awards going down:

Hart (League MVP): Alexander Ovechkin, Capitals. He had the most goals in the league, even after missing a few games. No doubt, he is the games most electrifying player. He will also take the Pearson (NHLPA's MVP) as well, and set up that trophy table pic with the Richard Trophy (most goals) all lined up so neatly.

Who should win? Ovechkin. With apologies to Malkin and Datsyuk, no player means more to their team than Alex the Gr8.

Vezina (Top Goaltender): Tim Thomas, Bruins. You name the stat, he leads (well, almost), but you get the picture.

Who should win? Thomas. Backstrom and super rookie Mason both play for much more defensive minded systems. What Thomas accomplished this year was quite impressive.

Calder (Rookie of the Year): Steve Mason, Blue Jackets. He just was amazing from November onward... 10 shutouts! His Blue Jackets made the playoffs for the first time because of him.

Who should win? Mason. Bobby Ryan, previously known as the guy drafted behind Sidney Crosby, had a great season as well, but Mason was lights out for a team that needed him to be just that.

Norris (Best Defenseman): Mike Green, Capitals. Everyone is talking about how this will be the tightest race, but I think many voters, and remember these are all voted on at the end of the regular season, were too mesmerized by his 30+ goals from the blueline to notice that Green doesn't play defense.

Who should win? Nicklas Lidstrom. He's like Ricky Bobby... just the best there is. It's as simple as that.

Jack Adams (Coach of the Year): Claude Julien, Bruins. He moved this team from the bottom playoff seed last year to the top seed this year, and dominated the East all season.

Who should win? Julien. Andy Murray did an amazing job with the Blues, but Julien's team overall exceeded expectations a little more.

Selke (Best Defensive Forward): Pavel Datsyuk, Red Wings. No one does it better. He will also be a repeat winner of the Lady Bing, unless his teammate Lidstrom takes it.

Who should win? Datsyuk. Flat out.
Posted by The Plumber at 4:17 PM