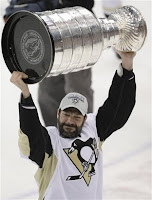 The Stanley Cup Champion Pittsburgh Penguins have agreed to terms with right wing Bill Guerin on a one-year contract. ESPN reports that it is for $2 million.

The Penguins have also signed forward Craig Adams to a $1.1 million, two-year contract. He will make $550,000 during each season of his new deal.

The Carolina Hurricanes announced that the team has agreed to terms with forward Jussi Jokinen on a two-year contract. The deal will pay Jokinen $1.5 million in 2009-10 and $1.9 million in 2010-11.

Although it was reported the other day in the Daily Herald: The Chicago Blackhawks and Dave Bolland, agreed to a five-year contract that pays $3.375 million per year. He made $887,000 last season. Hefty raise, no?

The Denver Post reports Peter Budaj has been re-signed by the Colorado Avalanche. A source with the Avs said Budaj has agreed to a one-year, $1.25 million contract. He made $800,000 last season.

Stay tuned here. I will update as they come in.
Posted by The Plumber at 10:39 PM